Long-term monitoring of climate and vegetation is one of the most important aspects of the LTER Network. At the BNZ LTER, specific sites, referred to as the BNZ "core sites", were established initially in the 1980s (during LTER I) to address the conceptual theme of floodplain and upland boreal forest succession. It was hypothesized that succession in floodplains (following fluvial disturbance) and uplands (following fire) would follow a predictable development of hardwood and then coniferous stands, with black spruce stands becoming the terminal endpoint until disturbance reset the successional trajectory (Viereck, L.A. 1970, Van Cleve et al. 1991, Yarie et al. 1998 ). Successional development was predicted to be punctuated by dramatic changes in site characteristics, community composition, and ecosystem processes. These periods of change in stand development were referred to as "turning points". BNZ LTER core sites were chosen to specifically monitor these "turning points", and sites were selected because they represented transitions between stages of the chronosequence as defined by the original floodplain and upland successional models.

Over the past 10 years, there have been multiple studies that have shown that boreal forest succession following disturbance in both interior Alaskan floodplain and upland forests is more complicated then initially defined by the original models put forward by Viereck and colleagues nearly 40 years ago. Synthesis of long-term vegetation data from our floodplain core sites reveals a complex interaction between successional processes, community dynamics (in particular herbivory), and potentially directional change in climate is driving understory vegetation patterns in mid- and late-succession (Hollingsworth et al 2010), and initial successional pathways post-fire appears to be strongly influenced by pre-fire composition, site characteristics such as moisture, and burn severity (Johnstone et al. 2009, Bernhardt et al. 2011, Hollingsworth et al. 2013). Finally, stand self-replacement appears to be the most frequent successional pathway over the last century, most likely due to site characteristics (solar insolation and altitude) and not time since last fire. Collectively, these studies indicate that timing and severity of disturbance, herbivory, pre-disturbance plant composition, and site characteristics strongly interact to allow for shifts in both community composition and successional trajectories. This suggests that the conceptual framework used for establishing the BNZ core sites are not capturing the range of variability in post-disturbance vegetation succession and ecosystem processes.

Establishment of a regional network of sites

As the BNZ LTER expanded our focus to understand regional effects of climate change and in particular, climate-disturbance interactions (including fire, permafrost thaw, and insect/pathogen outbreaks), we recognize the need to shift away from monitoring floodplain and upland successional dynamics as was initially defined several decades ago, but still maintain the integrity of this long-term monitoring record.

Our current emphasis on regional dynamics and changing successional trajectories requires a more spatially extensive perspective. To meet this challenge, we are expanding our core measurements to an extensive, regional set of sites (Regional Site Network) chosen to address variations in site conditions driving divergence of successional pathways. This regional site network focuses on black spruce, which is the most extensive forest type in interior Alaska (Van Cleve et al. 1983) and is experiencing radical disturbance-driven changes in successional dynamics (Johnstone et al. 2009).

A large proportion of the boreal forest within interior Alaska situated between the Yukon River and the Alaska Range falls within three ecoregions, which are partially accessible from the road system. These ecoregions are the Ray Mountains, the Tanana-Kuskokwim Lowlands, and the Yukon-Tanana Uplands. All three ecoregions have a strongly continental climate with cold winters and warm summers, discontinuous permafrost, and prevalent forest fires. While the ecoregions have many similarities, permafrost temperature, summer moisture, and dominance of forest fires varies markedly.  Detailed information on the design of this site network can be found in the Research Site Installation Methods.

The Ray Mountains (~ 51,000 km2) is an area that was largely unglaciated during the Pleistocene, and permafrost is generally discontinuous and ranges from thin to moderate thickness. The parent material in this ecoregion is metamorphic Ruby terrain and is usually covered with rubble, so soils are subsequently shallow and rocky. The vegetation is dominated by black spruce woodlands, while white spruce, birch, and aspen usually are restricted to warm, south-facing slopes. Forest fires occasionally occur in the summer.

The Yukon-Tanana Uplands (~ 102,000 km2) are broad, rounded mountains underlain by the meta-sedimentary Yukon-Tanana terrain. Most surfaces are comprised of bedrock and coarse rubble on ridges, colluvium on lower slopes, and alluvium in the valleys. The region is underlain by discontinuous permafrost on north-facing slopes and valley bottoms, and especially in valley bottoms or toe-slopes, permafrost can be thin, ice-rich, and relatively "warm". Vegetation is dominated by black spruce on north-facing slopes, and black spruce woodlands on ridge tops and tussock and scrub bogs in valley bottoms. White spruce, birch, and aspen are dominant on south-facing slopes. This area has the highest incidence of lightning strikes in Alaska and the Yukon Territory, causing frequent forest fires (Dissing and Verbyla 2003)

The Tanana-Kuskokwim Lowlands (~ 52,000 km2) are alluvial plains that slope gently northward from the Alaska Range. The undifferentiated sediments of fluvial and glaciofluvial origin are capped by varying thicknesses of eolian silts and organic soils, with occasional sand dunes and glacial moraines. Even though a rain shadow exists due to the neighboring Alaska Range, surface moisture is high due to the gentle topography, patches of impermeable permafrost, and poor soil drainage. Permafrost is thin and discontinuous and permafrost temperatures are near the melting point. Collapse-scar bogs and fens caused by retreating permafrost are frequent and related to climate warming since the Little Ice Age. Vegetation is dominated by boreal black spruce forestswith black spruce in bogs. Balsam poplar is generally restricted along rivers terraces, trembling aspen to south-facing slopes and glacial deposits, and white spruce to well-drained substrates. Fire is occasional in this area, and is often dependent on the site moisture of a site.

Design of the Regional Site Network

Over the past decade, there has been extensive work by numerous LTER investigators across these ecoregions. These research projects have provided important baseline information on site characteristics, controls over responses to disturbance, and differences in climate-disturbance interactions among and between the three ecoregions. To capture the variability in community composition and ecosystem processes within black spruce forests and to enhance our ability to predict future landscape patterns in the face of a changing climate, we developed the following experimental design. We are establishing a site network where we will monitor vegetation composition and productivity, permafrost status (soil temperature and moisture), and climate (air temperature, precipitation, and radiation) at black spruce stands of various ages (time-since-fire) and site drainage regimes across the three ecoregions mentioned above.

These sites have been selected based on accessibility, age, and site drainage status. Several of the core black spruce LTER sites that are currently being monitored will be incorporated into this network. Within each ecoregion, we selected stands in three age classes (young [0-15 years], intermediate [40-60] and old [>80]). We roughly selected 36 sites across each age class (n =118) that cover gradients in site drainage (soil moisture, permafrost status, soil texture, and topographic position), post-fire tree densities of spruce and hardwoods.

Check out an interactive map of the BNZ LTER Regional Site Network. For more information about this map contact Jamie Hollingworth.

Moisture and Stand Characteristics
for Young, Intermediate and Mature Sites 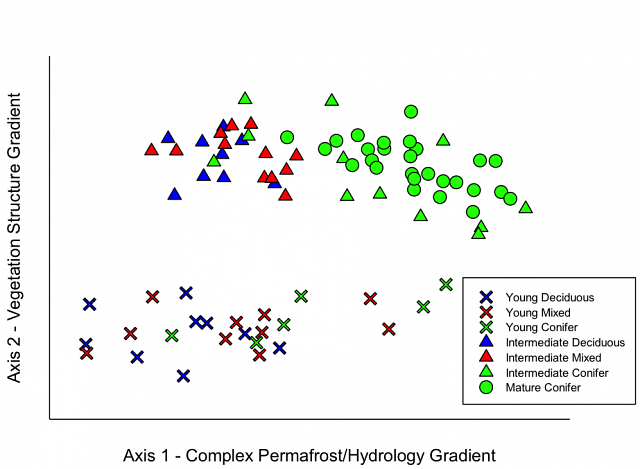 Non-metric multidimensional scaling ordination of Regional Site Network sites based on vascular and nonvascular species composition. Sites closer together in ordination space are more similar in species composition. Axis 1 is correlated with environmental variables including active layer depth, site moisture, and soil moisture and represents a complex permafrost /hydrology gradient. Axis 2 is correlated with vegetation characteristics such as % tree canopy, vegetation height, and % moss at a site, all of which are often associated with “time since fire”. There is a distinct break in the ordination indicating similar species composition across young sites with a few notable exceptions in very wet or shallow-permafrost areas. The ordination indicates the large variability in species composition across sites classified as “conifer” stands, and in particular intermediate conifer stands. 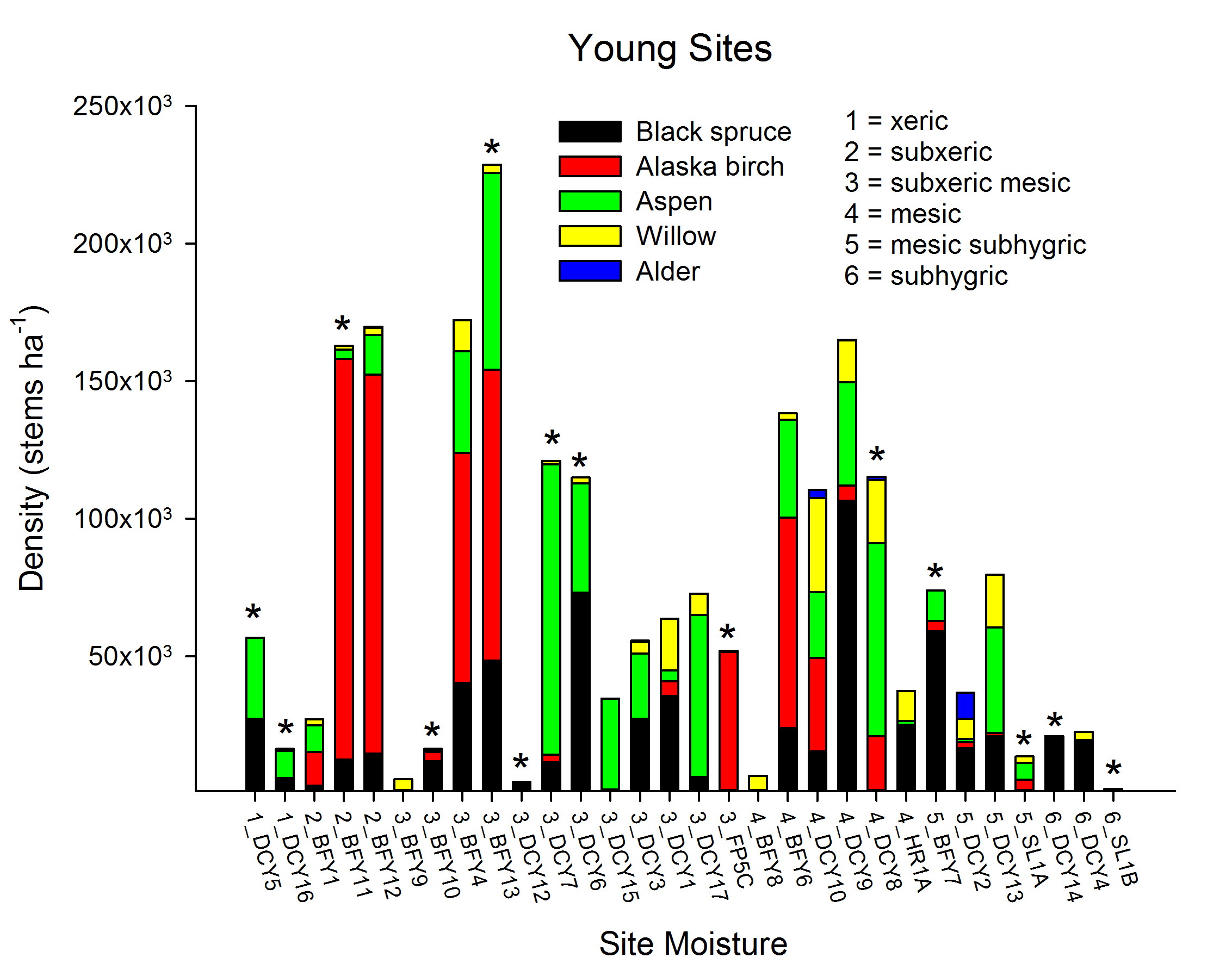 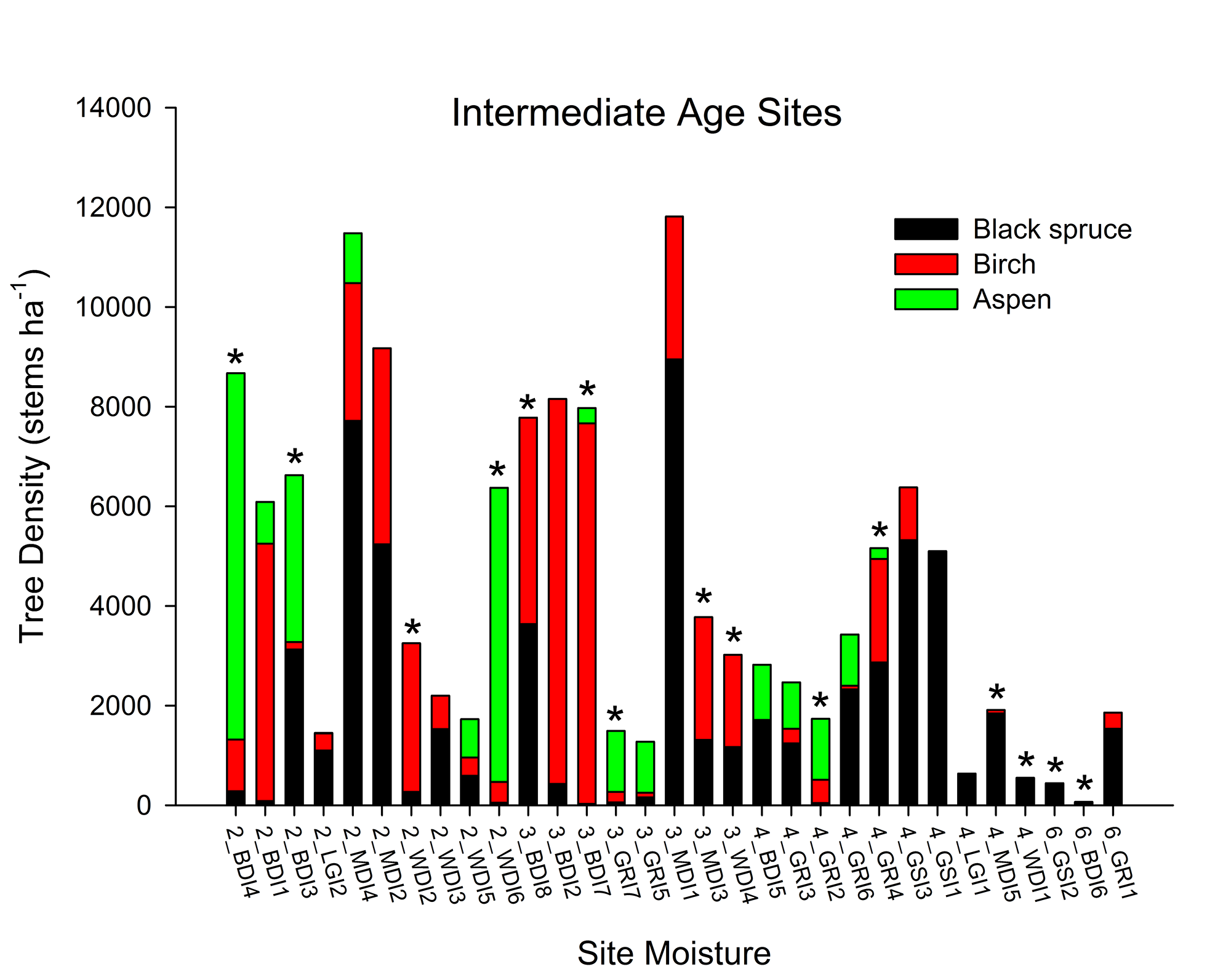 Tree density of tree species at Intermediate-Age sites of the Regional Site Network (2015). 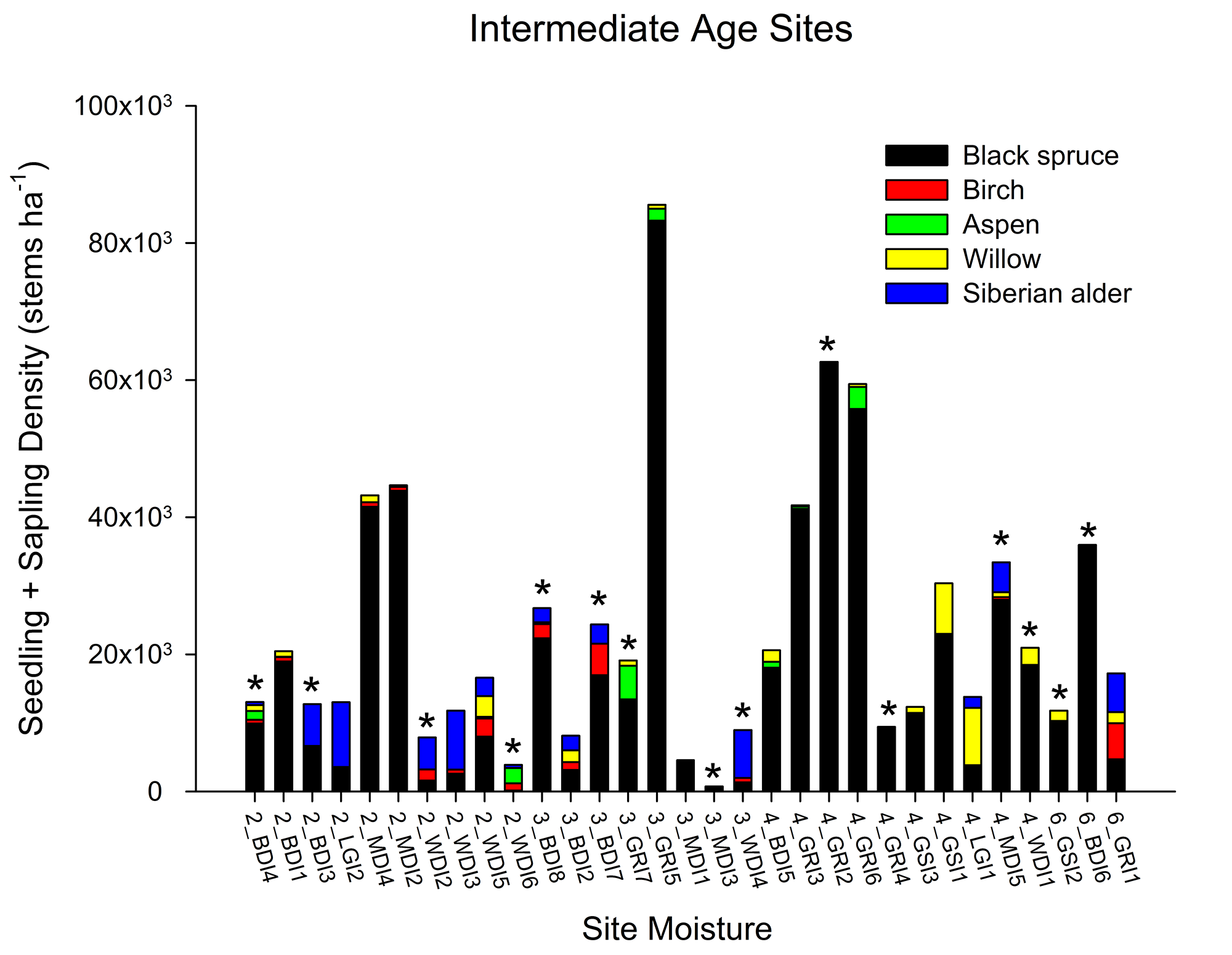 Seedling, sapling and shrub density of tree species at Intermediate-Age sites of the Regional Site Network (2015). 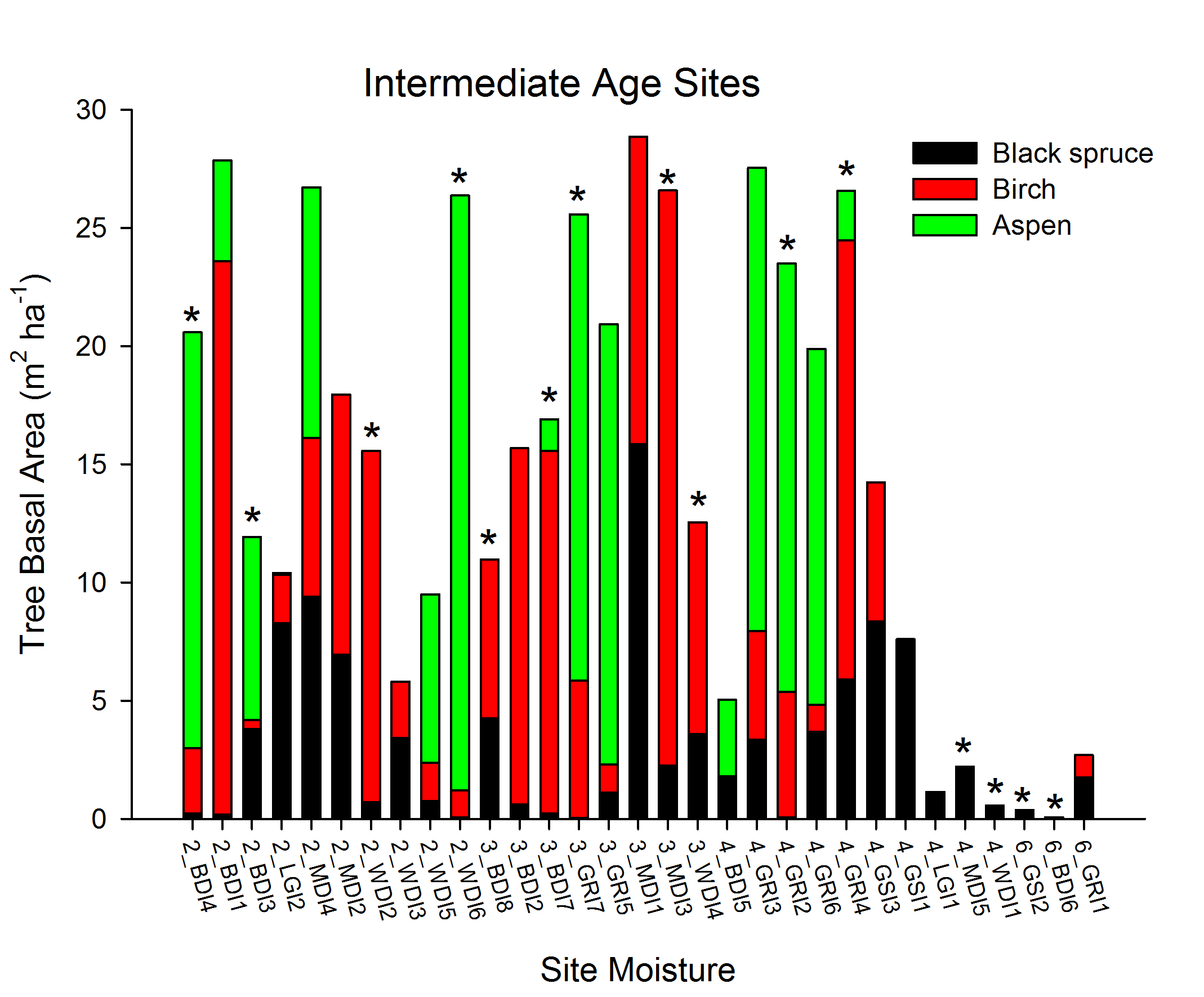 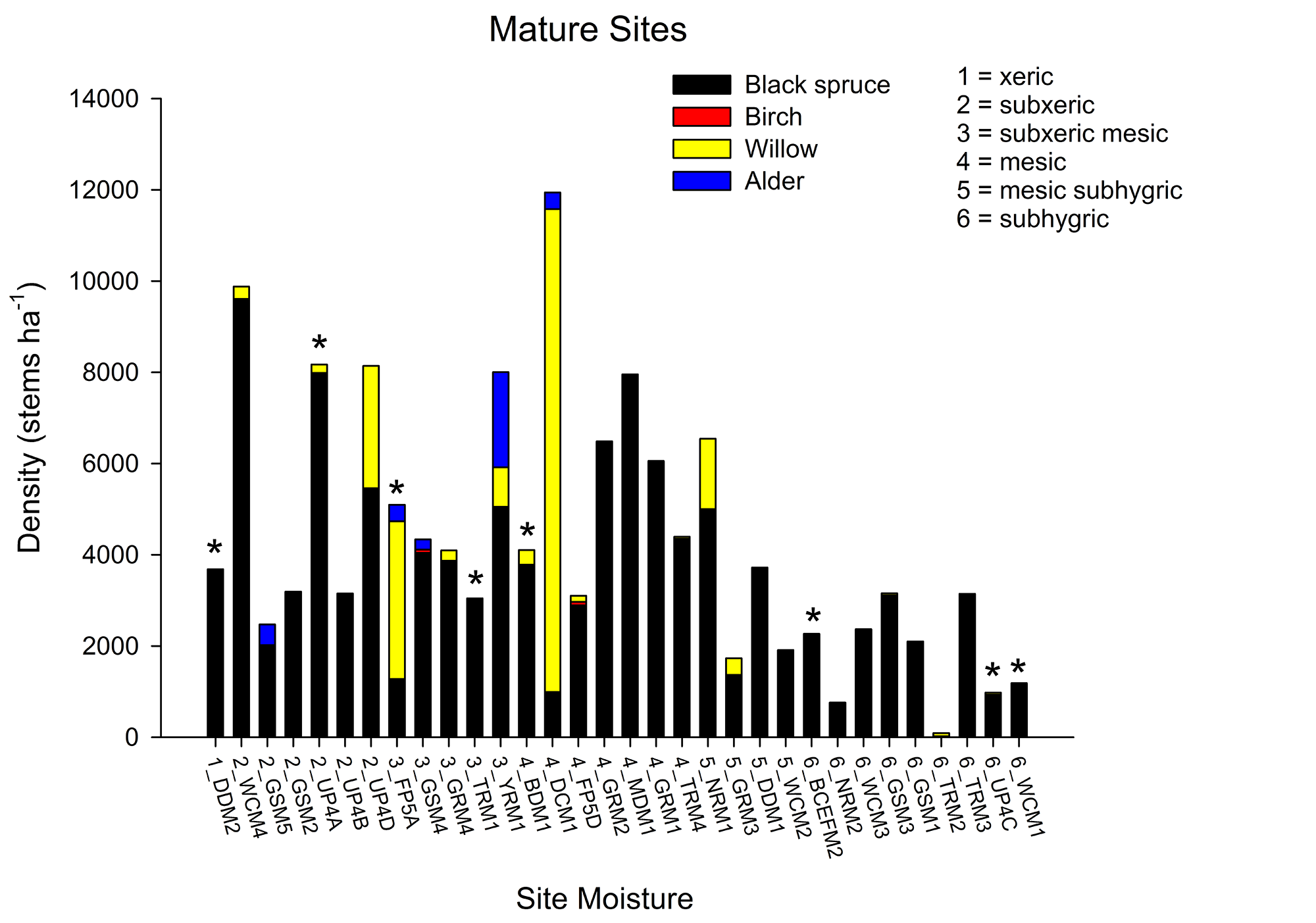 Tree and shrub density at Mature sites of the Regional Site Network grouped by site moisture (2015). 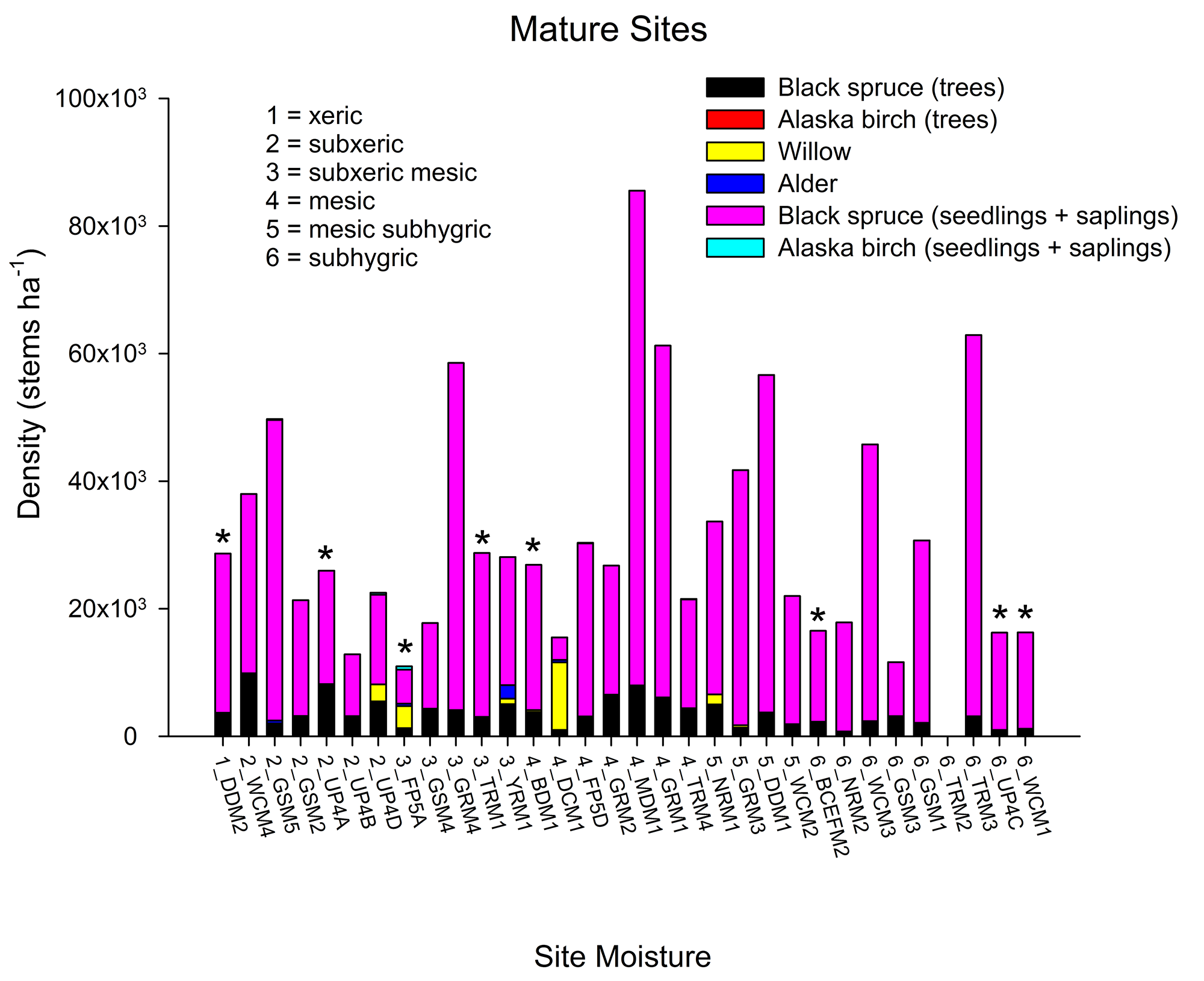 The University of Alaska Fairbanks is an AA/EO employer and educational institution and prohibits illegal discrimination against any individual.
Learn more about UA's notice of nondiscrimination.